Andrew Lebovitz from Weston, MA is a 2014 graduate of Middlebury College. Andrew was a 3-star recruit on tennisrecruiting.net and was ranked as high as #226 nationally for his class.

Andrew Lebovitz from Weston, MA is a 2014 graduate of Middlebury College. Andrew was a 3-star recruit on tennisrecruiting.net and was ranked as high as #226 nationally for his class.

Donovan Tennis Strategies (DTS): How did you make your decisions regarding which colleges you wanted to pursue? Tennis ranking? Academics? Gut-feeling?

Andrew Lebovitz (AL): My decision about which colleges to look at was probably based a little more on academics than tennis ranking. I definitely looked at schools where I would not have been recruited just because of their high academic standing. However, tennis did play an important role, and I found myself looking at more schools that both had great academics and a tennis program that was pretty strong and that I could play on.

AL: I started contacting some coaches in the spring of my junior year (I think I should have contacted all of them then), especially the coaches whose schools I went and visited – I tried the set up face-to-face meetings with those coaches. The rest of the coaches I contacted over the summer. My first contact with all of the coaches was by email, and the correspondence usually continued over email, but occasionally I would talk to a coach over the phone.

DTS: How did you form a relationship with the coaches you were courting?

AL: I thought that meeting the coaches face-to-face was the way I really connected with some coaches. I know that before, when I was just emailing a coach, the coach didn’t seem as interested but after I got the chance to sit down with a coach, more times than not the coach showed more interest. I guess it’s just easier to relate to a face than a bland email – I know that these coaches are getting a ridiculous amount of emails from student-athletes, and really the only way to distinguish myself was to actually go to the school and meet with the coach.

DTS:What went well in the recruiting process? What would you have wanted to improve?

AL: I thought everything ended up going well (I got into the school I wanted). I did give myself a chance to visit schools and coaches so I had enough information to make a final decision about the school I wanted to go to. I still wish I hadn’t been so tentative in the beginning of the recruiting process with emailing or contacting coaches. To be fair, it is not easy (well, at least it was not easy for me) to put yourself out there and have someone judge you while not-knowing whether they will respond or not, but I really should have put any hesitation aside (which ultimately just led to procrastination) because it only hurt my chances of making connections with more coaches and of trying to visit as many schools as possible.

DTS: How did you make your final decision? Tennis ranking? Academics? Financial reasons? Gut-feeling? Combination of some/all of these?

AL: A good Tennis-ranking and great academics were really important for me, and with those in mind, I was able to narrow it down to less than five schools. After that, though, I really relied on gut-feeling mostly because the final two schools I was really interested in, though different, were good fits for me. After going on my overnight visit to Middlebury I just felt that I should apply there, so I guess gut-feeling ended up being the final decider for me.

DTS: How did your parents factor into your recruitment process? Did they help? Did they try to control your decision?

AL: I must say that my parents, especially my mom, played a pretty big role in my process. They helped me research schools, made sure I looked at schools that they liked (for them, exemplary academics was a necessary component of any school I applied to), came with me on all my visits, and were basically apart of every part of the process. I think they did help, but sometimes their presence was an annoyance; I mean, it becomes hard to meet with a coach if your mom is occasionally interrupting your conversation with questions. Ultimately, they did help, though. I am someone who tends to rely on gut-feelings over anything else so without my mom figuring out important facts about schools, my final choice might have seemed arbitrary and could have made me second-guess where I ended up deciding to apply.

DTS: Do you have any other advice for players just starting the recruiting process?

AL: Just get on top of contacting coaches in the spring or your junior year and make sure you play in the tournaments and try to go to a showcase so coaches can see that you’re a good player. For me, I was always a little afraid that a coach would just ignore my email, so I took awhile to actually sit down and email a coach. This is definitely the biggest mistake I made because getting an early start is the easiest way to make the process less stressful. 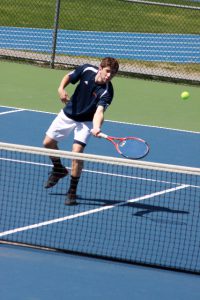 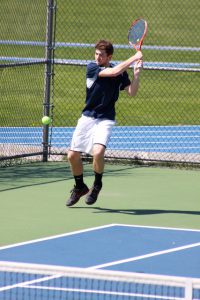