The First Year Transition to College

From Recruit to Student-Athlete: Understanding the Initial Transition into College and College Tennis.

For more information on these services, contact David Donn. David@donovantennis.com, 413-537-3084.

The day that verbal commitments are made, or college acceptances are received and deposits are made, many players and families celebrate the end of the sometimes long and stressful recruiting process.  Yet, those moments, while appearing to close a significant chapter, actually open the door to a new and vitally important stage for recruits: the transition to becoming a collegiate scholar-athlete. In this series of 3 articles, DTS attempts to continue guidance into the collegiate foray.

DTS surveyed freshman who recently concluded the first semester or term of their college experiences.  Players from women’s and men’s programs, across the 3 NCAA divisions, shared their thoughts on a number of topics related to college in general, as well as more specific experiences as college tennis players.  The 3 part series is an expression of patterns of experiences, as well as unique considerations and recommendations, which will serve the purpose of better preparing high school recruits for the final stage of their recruiting process, otherwise known as the college transition.

THE GENERAL TRANSITION INTO COLLEGE

In starting this interview project, college freshmen were asked to recall their level of confidence or concern about transitioning into college and a varsity tennis experience. Almost unanimously, the student-athletes related excitement more specifically than nervousness.  Where there were more identifiable concerns, those concerns revolved more commonly around the general college social experience than the academic or team adjustment. Two main assessments seemed to come into play with the immediate college transition:

The subsequent focus of the student interviews addressed the more specific transition into the collegiate athletic experience. 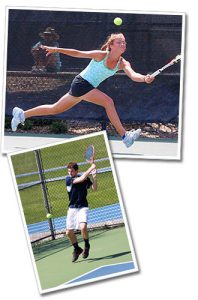 As with other general college transition concerns, most interviewed athletes said that nervousness around tennis dissipated within days.  As soon as the unknown expectations came to light, and one was just “in it”, confidence in handling the reality of the team experience grew.  Most players cited the support of the established team members as a key factor in easing the tennis transition. Knowing that a group of teammates is supporting your efforts is comforting. 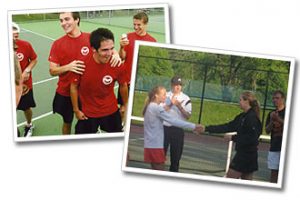 1) Preparing both physically and mentally for the team component before getting to campus is important.  Talk to coaches and teammates over the summer to be aware of what to expect and to get suggestions on how to be ready.  Coming into the first day of practice physically fit and competitively sharp is a big advantage.

2) Starting in the “team first” mindset and moving away from the player first priority helps with the adjustment on and off the court.  If possible, implement a team experience like high school tennis to have team skills which will be central in college tennis.

All in all, most players emerging from recruit status to collegiate scholar-athlete cited adjustment to the team and the quick bond with teammates as the easiest part of the overall college transition.  The amount of communication that a recruit dedicated to getting to know coaches and teammates prior to college seemed to correlate directly with the level of comfort with the personal adjustment. In a transitional period that can be busy and chaotic for any student, the combination of structure and support provided to student-athletes can be effective in hastening the period of settling in.

PART 2 Preview:  The next installment of this series will highlight the specific practical challenges that first-year student athletes faced as part of their start in college and college tennis.  Stay tuned for it’s release!

Words of Wisdom: Coaches to Parents

The Transition to College – Part 2
Scroll to top