Advice on Transitioning to College Tennis

In this final article in the DTS series addressing the transition from recruit to collegiate scholar-athlete, players provide insight into coaches‘ and teammates’ roles, and recommendations for a successful step from high school to college.

THE TEAM & A RECRUIT’S COLLEGE TRANSITION

Many feel that the connection to a collegiate team upon entering college is a unique advantage for incoming student-athletes compared to the students transitioning to college life without those associations.  Our survey of anecdotal data reaffirms that claim. Every freshman collegiate tennis player we surveyed acknowledged the

significant role of the tennis team in their first-year transition.

A Coach’s Role:  The role of the coach varied greatly in the feedback, with some coaches having less direct involvement in students’ lives outside of tennis, to a few players citing coaches who played an extra parental role, assisting freshmen with important decision making to stress management.  While a coach’s specific role may differ from program to program, more generally, a coach’s role was identified as one of encouragement, particularly on court. Many new players expressed liking pointers they may not have received before as juniors, as well as the general show of support.

Upperclassmen:  Most of the help with the overall collegiate adjustment seemed to come almost exclusively from older team members.  Time and time again, freshman at all levels of programs mentioned the very active role that teammates played in all parts of their transition.  Upperclassmen showed the way and set the bar for on-court expectations from training to cheering. They also shared plenty of off-court recommendations with regard to academic time

Contact and Communication:  The consistent message that flowed from discussion about a team’s role in the first-year transition is the necessity for a recruit’s early contact with the team and the coach.  Having some comfort and depth in those personal relationships prior to getting to school allowed for the supportive roles to flow freely through the transitional phase.

With a fall season under the belt, first-year college players were asked what they learned and will take forward into the continued transition process through the spring season and beyond.  Many of the answers expressed relief for a greater understanding of both academic and tennis expectations than when jumping in after high school. Going into the second half of the year, there seems to be more confidence and motivation behind strategies for managing time, stress and nerves on and off the court; handling the physical and emotional intensity of academics and tennis; building comfort in asking for and accepting help, keeping healthy perspective, etc.  Following is a selection of recommendations from current college freshmen across NCAA divisions to help recruits prepare for a fruitful transition into college and college tennis, long before stepping foot on campus as a first-year student. 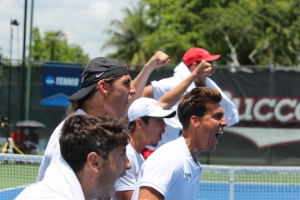 The Transition to College – Part 2